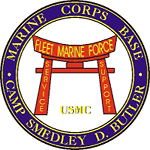 The Great Major General Smedley Butler wrote War is a Racket. It explains how it is seldom necessary and often promoted by the industry that would be much smaller if our military was limited to defensive action.

He insisted we should only defend targets within 200 of our shores.

Then there’s this… A Marine camp named after General Butler that is not only 7,000 miles from here, but is on foreign soil. And… the local Japanese have been trying to evict the U.S. military for years