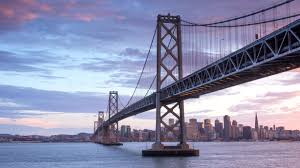 To give my mom a break from worry I moved to Oakland from Newport Beach to go to college in 1969. Well, she still worried, but at least matters were out of her hands.

The college I went to was California College of Arts and Crafts (affectionately called something like flatulence and laughter). It was very small and intimate.

I recognized a face. It was Bob Gardiner, an acquaintance from Newport. We became great friends.

I found out being a film director required an aggressive business attitude so I drew and painted. Bob was a Van Gogh type multi-talented genius. I was flattered to be his friend. One time I faked a heart attack in front of the cheese at Safeway and he drug me by my foot through the store and out the door where I got up and we ran away laughing.

I stopped by his apartment one day and he had friends visiting from Eugene, Oregon. They had a car. We pooled our cash and decided we could afford Chinese food in San Francisco. Across the Bay Bridge we went.

We found a place to park and everyone but I, caught a cable car. I was left behind in the big city and broke. I walked to Chinatown thinking I might see them. Haha.

Chinatown is next to North Beach, the old beatnik neighborhood. I once saw Allen Ginsberg there. There were lots of sights and people to gawk at; even more entertaining than Walmart.

I didn’t find Bob and his friends but I ran into another friend from Newport. Tom Moy and his girlfriend bought me a hot fudge sundae. Ah, private charity. No paperwork.

It was well past dark and getting chilly. I lined up with fifty or so other hitchhikers on Broadway heading to the Bay Bridge (which my stepdad worked on, by the way) a big car pulled over and as many as could fit crammed in. People are kind to offer a ride to strangers. The baby Jesus would approve.

As we crossed the bridge the guy in the front passenger side started mumbling about extreme danger ahead, like almost every self-serving politician talks about Iran or Russia or any other concocted enemy of the day.

He tried to open the door and jump out. We pulled him in by his clothes. If he were naked he’d a been a goner. Up the freeway by Berkeley he made it most of the way out but we held him until the driver got pulled over. Away he ran down the side of the freeway, never to be seen again.

From the University Avenue exit, I had about eight miles to get to my home in Oakland. I started walking and hitching at about midnight. Pretty soon a Buick Electra 225 with three guys pulled over. It was about as big as China’s first aircraft carrier that was just launched, or maybe Russia’s only one that was recently on fire killing two people (formidable foes, those two).

The guy in the back seat says, “Ya got any dope man?” I say, “No.” He says,”Ya got any money?” I say, “Yeah, I’ve got $56 and it’s for my rent that’s due tomorrow.” I go on to explain about my financial situation not being any better than theirs and why don’t they rob some rich guy. So they go out of their way to take me home. Phew!

I walk in my little room and the landlady’s cat is locked in there. It had defecated on my bed. I curled up on the floor went to sleep.