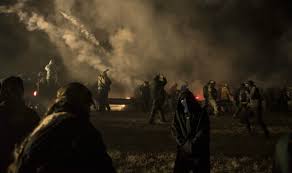 President Trump has urged Attorney General Jeff Sessions to sue makers of opioids so no one will OD on them anymore.

I was born in 1950. We had won WWII with a resolve that astonishes us yet today. The horrors of war were fading and prosperity was on the rise because hopes and dreams were put on hold to support the war effort. Our might won the war, and peace allowed resources to be used productively instead.

I was brought up by my parents and the television. I loved the war movies and newsreels about the war. In Santa Monica my friends and I played war, chasing each other through the fenced-in yards of the neighborhood. We kept our limbs and our sanity. The good guys always won and the devastation of war was in black and white and far away.

This war that Mr. Trump wants to perpetuate today is different, although WWII probably wasn’t as simple as lawsuits and big spending either. Let’s get really complicated and ask, “Why so many overdoses?”

To answer that, another question comes to mind. How many people OD on drugs acquired legally? Granted, it isn’t very smart to let dope be such a focus that it clouds our logic. But the accidental overdose deaths are caused by the fact that the strength of the drugs is unknown.

It is becoming increasingly evident that irresponsible behavior is a direct result of safety nets legislated to prevent such behavior. It goes against the idea instilled in our formative years that a big stick simply cures all ills.

Republicans should take a look in the mirror when they claim to advocate free markets. A principled position would eliminate 90% of treasured Republican policy. A free market would allow drug users to make that fatal decision with the knowledge that he and those around him will experience the impact of that decision.

I can just see the pharmaceutical companies shriveling in fear of Sessions’ heavy hand. People in unbearable pain will pay the price of a war meant to save a few nit-wits who have been trained by the totalitarian state to live for the moment with the expectation that the visible hand of government will sue the drug companies for sticking that needle in their arm or pill in their mouth.

This same situation exists with spoiled engines from ethanol, and air pollution from government-managed land on fire in California. Come to think of it, I wonder if the President is pondering whether to invade California to better manage their public land or simply suing them for our lung damage.

“Always stand on principle, even if you stand alone.” John Quincy Adams