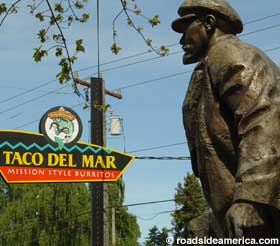 If this seems a bit hard to digest, look at it this way: Do you see the people responsible for spreading the wealth around living in squalor? Where is the greatest concentration of wealth in the United States? The answer: The neighborhood around Washington D.C.

I’ve always found a bizarre relationship between the so-called Left and Right. The Left used to oppose war. The Right used to oppose the welfare state. They are both equally destructive and the common thread between the two is they both require huge, intrusive and confiscatory government to exist.

The conflict reported in the news between the Left and the Right is contrived in order to make it seem like there is no such thing as the alternative, a limited government that works. This is because there is just too much to be gained by those with connections to the unlimited government for any limits to gain traction.

Government limits opportunity and limited opportunity limits equality. If you doubt this, try selling your house and then and buying a similar one near D.C. with the proceeds.

So in this column I try to attack the Left and the Right equally. I want to be fair.

Thanks for reading The Alternative. I’d love to hear back from anyone who agrees or disagrees. Please let me know if you would like to stop receiving this. And, as always, permission is granted for sharing in any way you want.

“The Biggest No-Brainer In the History of Mankind”

Back in 1977 I got a letter from my grandpa in Dumont. This was different. Grandma was always the one who wrote. But she was in the nursing home dying of cancer.

At 27 years of age I figured I’d survived the choker-setter life well beyond the odds and so I struck out for Iowa. My mom and sister were tied down and I looked forward to being Grandpa’s friend instead of a distant stranger, as had been the case forever.

But this column is about investing. I’ve been an accidental investing genius. The first one is a personal thing so I’ll just say that my wife, Dawn, is the best investment I ever made. Second best was the 1963 Chevy pickup I bought in Portland in 1978 for $500.

That pickup served us well on the farm for thirty years hauling hogs, feed, and seed. We just sold it for $500 to a young man who plans to use it to pull his camper. Good investment?

I could list some bad investments I’ve made but they are too embarrassing, so I’ll just discuss some investments that other people have made. But before I go on, a word about the word: investment. I’ve found the word is passed around by politicians like cigars in a maternity ward. Invest in education, invest in jobs, invest in national security, and invest in equality come to mind. Those things are not investments any more than Medicare is insurance.

There is a huge difference in the old Chevy and the investments made by politicians. I worked for the money I invested. Politicians simply take the money from one person and hand it to another, claiming it will be spent more wisely there.

A good example of a great investment would be “put options” on Morgan Stanley Dean Witter (who occupied 22 floors in the twin towers) in the three days before the 9/11 attacks. Volume of buying these bets against the international banker’s stock increased 1200% in those three days. The result was $10 million in profit for someone when trading resumed. The same thing happened with the airlines involved in the disaster; United and American.

After the attacks by mostly Saudi Al-Qaeda, the United States attacked Iraq (go figure), beginning a $4 trillion spending spree by our defense department in the Middle East. Take a guess on how defense industry stocks have fared in the last sixteen years.

But let’s be fair. Government doesn’t only lay waste in phony “defense” schemes. Here are some statistics on our “investment” in the War on Poverty. The year 1964 has the same significance as September 11, 2001 as a turning point.

Children from fatherless homes are more likely to drop out of school, die by suicide, join gangs, and commit crimes. In 1960, 22% of black children were raised in single parent families. After a generation of living with the investment of the War on Poverty, that number jumped to 75%.

It is no coincidence that the initiation of Lyndon Johnson’s Great Society was a turning point in the decline of equality for black people. For 100 years with no investment but a granting of freedom, blacks made steady progress. Then along came the academics, civil rights leaders, and politicians who believed investing can’t be left to individuals but can only work when guided by superior beings like themselves.

Rather than blame the sad state of equality on something that happened a hundred years prior to that, the blame should go on the welfare state that obviously started it.

As the radio ad for some investment scheme goes, “It’s the biggest no-brainer in the history of mankind.” We were not using our brains when we decided we can’t invest for ourselves; that it has to be done by people whose primary skill is getting elected.