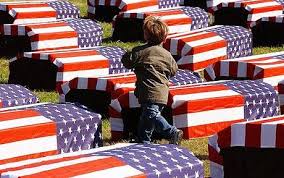 I got an email forward about flag draped coffins describing each step of folding the flag. It was quite enlightening and informative. These things always rub me in an uncomfortable way, though, because what passes as patriotism nowadays often results in unnecessary death of Americans. Hardly seems patriotic to do what destroys the lives of the ones whose country we claim to be patriotic about eh?

This is what I replied to the sender (and he agreed with me):

“Flag draped coffins reminds me of GW Bush’s love for them. He wanted to keep them all to himself and not allow the media to expose the carnage he created. I’m not an advocate for international courts and war crimes trials. I think war should be more carefully considered than to be subject to rules like a board game. Either have a goal, do it and be done or be decent human beings and respect life. GW is as good a subject for a war crimes trial as anyone if such nonsense has to prevail. There hasn’t been a flag draped coffin containing a soldier essential to US security in most of our history, including the two world wars. But it takes some critical thought to realize this.

I liked this part of your FW in particular:  The 5th fold is a tribute to the country, for in the words of Stephen Decatur, ‘Our Country, in dealing with other countries, may she always be right; but it is still  our country, right or wrong.’ “