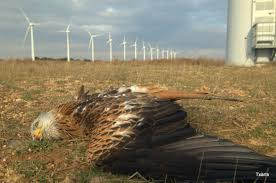 The signs of the season photo feature in the December 19 IFT was a nice departure from everyday news features. Thanks. But I’d like to add a caption to the picture of the eagles on the soybean field. Let’s call it: “Survivors.”

The eagles stand with wind turbines in the background. Wind turbines kill 573,000 birds (including 83,000 raptors such as eagles) and 888,000 bats per year in the United States.

Promoters of wind energy boast of about 25% of our electricity coming from wind. With 40% being forecast in 2020 that means 40% of our electrical energy will be overpriced for Iowans in less than four years.

You don’t think it is over priced? Take these quotes and think for yourself:

“I will do anything that is basically covered by the law to reduce Berkshire’s tax rate. For example, on wind energy, we get a tax credit if we build a lot of wind farms. That’s the only reason to build them. They don’t make sense without the tax credit.” – Warren Buffet at Berkshire Hathaway’s 2014 annual meeting. Berkshire’s MidAmerican Energy has $5.6 billion invested in windmills.

Harold Prior, executive director of the Iowa Wind Energy Association in 2013 said if congress kills the wind-tax credit, “they’re getting into the business of picking winners and losers, which is what they say they don’t want to do.” See the irony?

I’ve called and left messages to these people asking them what petroleum subsidies they speak of that justify wind power subsidies. Repeated tries brought no response, so I looked into it myself. One obvious oil subsidy is military protection. The cost of this intrusion in the market has been horrific, with hundreds of thousands of lives lost and trillions of taxpayer dollars squandered. With such devastating consequences from these policies, why wouldn’t alternative energy advocates lobby to stop the carnage instead of piling on more handouts?

The unseen cost of petroleum subsidies is the delay of alternate source development because of taxpayer protection of a business that should have had that cost reflected in consumer prices. Shifting costs of petroleum products from the market to taxpayers keeps oil artificially low, reducing incentive to seek new energy sources.

A friend reminded me of the other subsidy, the Oil Depletion Allowance. This long term scam saddles taxpayers with the cost of oil as a dwindling resource. The oil industry brought out the tired old national security and energy independence story to put this over on us; just like alternative energy scammers do today.

Every time we turn around these windmills are deified, even at super extravagant, overpriced rest areas. It is a shame Iowans are so easily conned. It is just one more chapter in a long running story of trade associations lining their member’s pockets at the expense of (I hate the term, but) working families.

2 responses to “Letter to Iowa Farmer today on dead birds”