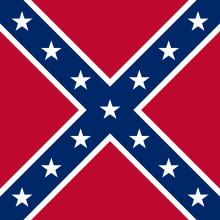 Yep. Slavery (even though The South wished to secede because it was sick of being a colony of The North) has now been legalized in Colorado. So if the battle flag of the Army of Northern Virginia is to be banned because it represented slavery then it would be a perfect symbol for Colorado, where a person can be forced to labor for the benefit of another:
http://www.kcci.com/national/baker-loses-samesex-marriage-cake-appeal/34696848